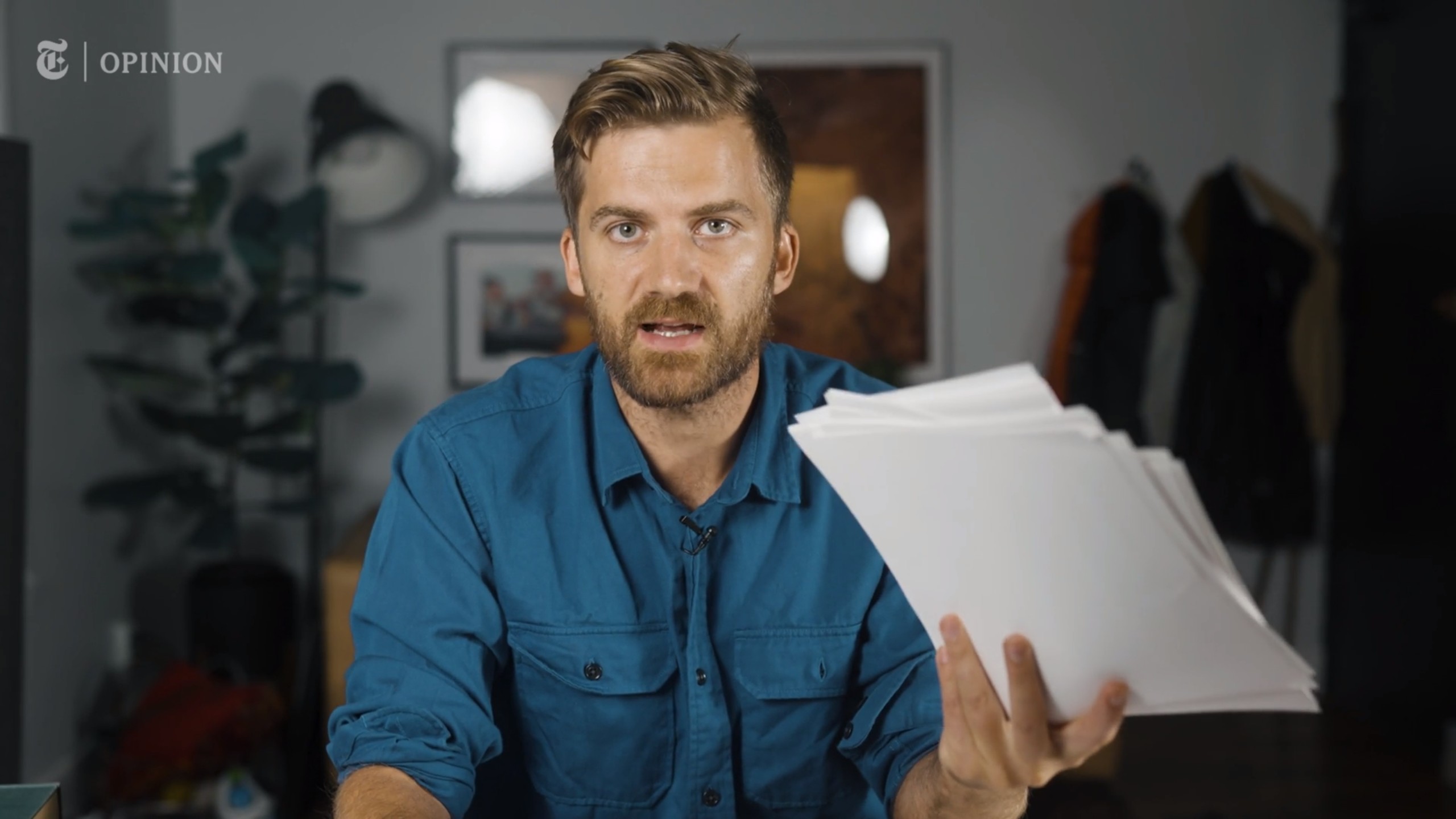 This morning, The New York Times published a new opinion piece video with the provocative headline “Blue states, you are the problem, in which Johnny Harris and columnist Binyamin Appelbaum attack a selection of Democratic-led states across the country for allegedly not living up to your values.

The 14-plus-minute video consists of an introductory segment followed by a set of three critiques regarding issues in three different states under democratic governance: California, Washington and Connecticut.

The California segment focuses on housing, the Connecticut segment on education, and the Washington segment on our state’s reverse tax code.

Several Cascadia Advocate readers were particularly interested in the Washington segment and reached out to seek NPI’s advice on this matter.

Our team watched the video and left quite disappointed.

Here is a transcript of the Washington segment:

HARRIS: Let’s go to another liberal stronghold here in Washington state. The Democratic Party talks about taxation, claiming that our tax code has been “rigged against the American people.” Democrats all the time denounce that tax cuts benefit the wealthiest Americans.

HARRIS: Democrats believe in a progressive tax system where the rich pay a larger share of their income than the poor.

It is like the most basic political vision of a progressive movement. It is at the forefront of the Democrats’ political platform.

So, people like Bill Gates and Jeff Bezos – two of the state’s most famous and wealthy residents – are in the pleasant position of paying less taxes as a share of their income than the poor who live in. that same state. And it is a fundamental inversion of the values ​​that the Democratic Party professes. There is no state with a more regressive tax system than Washington State.

HARRIS: And I speak like most regressive sense [more so than] Texas. Who is like the conservative stronghold of the anti-tax genre … is more progressive than Washington state, liberal Washington state.

How is that real?

Oh, and guess which other states on our map are also in the top ten for the most regressive tax regimes, like Nevada and Illinois.

APPELBAUM: There have been some changes, especially in recent years, but the overall situation remains resistant to change.

SEATTLE CHANNEL CLIP, UNIDENTIFIED SPEAKER: So I’m very concerned that right now – which is a really bad time to deter people from creating jobs in Washington state – that we are even considering it.

APPELBAUM: From that paycheck you earn most of this money goes to the state government. And so the effect of that is essentially to exacerbate inequalities.

HARRIS: Okay. So the wealthy Liberals don’t show up when it comes to housing or taxes.

The strangest part of the segment is a Seattle Channel clip that appears near the end, seemingly for no reason. This is a short sound clip in which a speaker says they are very concerned that we are thinking about “that”.

What is “that” a viewer might ask? What is this speaker referring to? A proposal to do what, exactly, which, according to the speaker, could discourage job creation?

Harris and Appelbaum don’t bother to explain. They just end their comments on Washington and move on to their next state, Connecticut.

An image from the video, Blue States, You’re the Problem (Via The New York Times)

While Harris and Appelbaum do a good job of explaining how the Washington state tax code is upside down (use ITEP’s state-by-state rankings and data for their visuals), they didn’t bother to delve into the fascinating story behind how we got here. This story goes back almost a century, to a series of events that took place in the 1930s … including a disastrous, indefensible and hugely consequential decision by the Supreme Court to overturn a popular initiative that allegedly levied a tax on the income.

They also haven’t talked about what the legislature and Governor Inslee recently did to address the issue. If you watch the video, you might get the impression that Democratic leaders in Washington are doing nothing to make Washington’s tax code more progressive, when in fact the Legislative Assembly and Governor Inslee have taken a number of important steps to secure an evergreen state tax code in recent legislative sessions.

Importantly, the state’s new capital gains tax forces the rich to pay more while the WFTC reduces the tax obligations of the less wealthy in Washington. Lawmakers have worked laudably on this problem on both sides.

These are hard-won victories in the 2019 and 2021 sessions despite objections from Republican lawmakers and even, in some cases, more conservative Democratic lawmakers like Issaquah’s Mark Mullet.

There is more to do, of course, which is why Democratic lawmakers are now working on proposals to levy a wealth tax on billionaires, increase inheritance taxes, and make property taxes more progressive and fair. Lawmakers are also holding tax town halls this fall to hear from Washingtonians on the same topic..

None of this – none of it – was mentioned by Harris or Appelbaum.

The duo also failed to mention that Washington has the initiative and the referendum, and that the right-wing forces represented by Tim eyman have historically used these powers of direct democracy to try to keep Washington’s tax code permanently broken and rigged in favor of the rich and powerful. Washington may have Democratic leadership, but that doesn’t mean there aren’t any hurdles or barriers in the way of achieving a goal like progressive tax reform.

Context matters. History matters. Yet much of the political commentary published today is superficial rather than substantive. Superficial instead of solid. Sensational instead of scholarly. And that’s a shame.

Rather than delving into the issues and trying to figure out what is really going on in the Democratic-ruled US states, and why, Harris and Appelbaum went through three important topics at high speed and then kicked off their discussion on the site. NYT’s web as bait for liberal penchant for public publishing.

“Blue States, You’re the Problem” certainly has some great production values ​​and polished visuals. The discussion, on the other hand, leaves a lot to be desired. This video could have been so much better… deeper, richer and more informative.

What a missed opportunity.