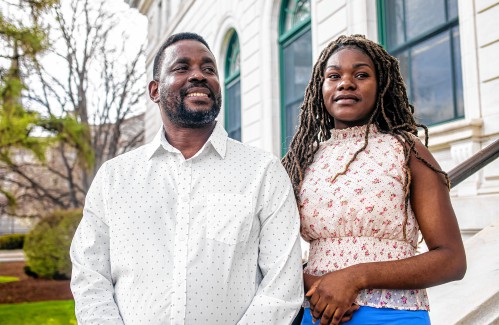 Concord Company Helps Immigrant Families Get Through the Tax Code

In 2015, while visiting his old friends and roommates, John Wani asked them what they thought about starting a tax preparation business.

His friends, François Ruvera and his wife Bijoux Bahati, accepted the idea, and Foresight Tax Services was born, right there, in the living room of their Manchester apartment.

“We all saw there was a demand,” Wani said, specifically to help immigrants with their US taxes. Wani and the others said they saw “predatory tax practices against refugees and new immigrants, as well as many misconceptions about the tax code as a whole. So if we start, we can work things out here. ”

Wani and Ruvera had a solid business background. Wani graduated from Southern New Hampshire University School of Business with a Bachelor of Business Administration and has experience in finance with the South Sudanese community of New Hampshire, a non-profit organization. Ruvera holds a bachelor’s degree in accounting from Champlain College, a graduate diploma in finance from SNHU and a master’s degree in business administration with a specialization in accounting.

Now Foresight operates in Concord and Buffalo, New York. They chose Concord because they had ties to the refugee community here and Bahati worked with refugee children in the school district. Ruvera is CEO and President of the company, Wani as CFO and Bahati as Marketing director.

“Our mission is to be able to help immigrants understand the tax code,” said Ruvera. Foresight offers tax preparation, as well as bookkeeping services for small businesses, and although they cater specifically to the immigrant population, Ruvera said, they will do business with anyone who needs their services.

In addition to their financial backgrounds, the three founders of Foresight speak multiple languages, a useful tool for serving a diverse immigrant population. Wani, who is originally from South Sudan and lived in Cairo, Egypt, speaks Arabic and Moru. Ruvera, originally from the Democratic Republic of the Congo, speaks Kiswahili, Kirundi, Kinyarwanda, Kinyanja and French. And Bahati, also from the Democratic Republic of Congo, speaks Kiswahili and Kimbembe.

“We have seen a lot of demand, especially in the tax area,” Ruvera said.

Wani recalled that 40 people showed up at their first unofficial location, their kitchen table. Now, Ruvera said they serve more than 150 clients in the Concord and Buffalo areas combined and prepare taxes for people in all 50 states.

For this particular tax season, the foresight team is preparing to help clients with the implications of the COVID-19 stimulus package passed earlier this year, which includes an expanded child tax credit and a tax credit. on expanded earned income.

Bahati said Foresight intends to go the extra mile to educate clients on the effects of these changes and the benefits they can gain from them, because if someone doesn’t pay their taxes properly, they can spend next to the benefits offered.

Ruvera added that they do this all the time, especially in an effort to help parents find financial assistance for their children. “We see the child being affected because his parents did not pay their taxes well,” he said. The goal of Foresight is to help people avoid this.

“We’re helping people see how, if your finances aren’t organized the right way, it can really impact your life and the lives of your children,” Bahati said.

Additionally, the Foresight team tries to help people identify scams and those who try to take advantage of their lack of tax knowledge.

“People assume they don’t have options, so they think the fraudulent practitioners they go to are the only option,” Bahati said. “Our role is to be available to people, give them tips and advice on how to identify someone who doesn’t have their best interests in mind, and make sure they do everything. correctly.”

Being the victim of a scam disproportionately affects immigrant and refugee communities, Bahati added.

“When people start to have financial problems, it doesn’t mean good for a new family that’s just trying to get through the trauma of war and everything,” Bahati said. Another goal of Foresight, she added, is to do everything possible to help new immigrants and integrate them into the community.

For more information on prospective tax services, visit their website.

The tax status of the sale of business a complex issue